I don’t know how new parents do it. They spend nine months growing a little human. But I think the hardest responsibility they carry is giving their child a permanent identity- naming their child. HOW DOES ONE DECIDE ON A NAME?!

While my decision was nowhere near as important as that serious business of naming a baby, if I wanted to start a blog- I needed to decide on a name. *Queue list of ridiculous name options* Yes, I make lists of every tiny idea that pops into my mind- I’ll judge the list later. This list of ridiculous names involved nearly every aspect of my life- my boutique, wedding planning, my career, my boutique again. But I kept dancing around the numbers that popped out like they were begging me to play tag with them- so naturally, I obliged. “Twenty nine” is decent but what happens after I turn the birthday page past twenty nine? “Twenties” is not awful, but again we are nearing the end of my twenties and I would like nothing more but to leave those in the past. So what decade was next? “Thirties” was promising! After all, I would be hanging out in the thirties lounge for a good while after this next birthday. URL taken. BAH- COME ON! I mean, who really wants their site to have a .blog or .net after it? Dot com is really where it’s at and I wasn’t willing to give in to the Christopher Columbus’s of the interwebs. Steal up all the dot coms so the little people can’t have any- how rude.

If this post so far has been increasingly confusing, I give you permission to bail now- it gets no clearer. Welcome to my thought process. It’s messy and chaotic, but if you find a good corner to snuggle up in, it’s usually pretty productive… in the very least entertaining.

There I am staring at the word “thirty” written out in my hybrid version of print and lazy cursive circled three times. I started asking myself why thirty? What is so important about this decade that I feel the need to write all about it? In this moment, our two pups (Bentley and Jax) started chasing each other around the house as I jumped up to let them continue their chase outdoors, without running into the furniture every turn. It occurred to me… I’ve spent most of my life chasing after that something. Success, good grades, approval from elders, acceptance from friends, money- but it all really boiled down to chasing after a generalized idea I had baselined for myself years ago. I was supposed to be settled into my ideal adult life by the end of my twenties. I was literally chasing my thirties.

I grew up with this idea of what I should have accomplished in my first twenty-some years of living- a bucket list if you will. We spent most of grade school playing that darn MASH game- would I live in a mansion, apartment, shack or home? Who would I marry? How many kids would I have? What age would all of this adulting happen? I blame that game- it clearly does not tell accurate fortunes. Anyway, I decided thirty was going to be the deadline a long time ago. Little did I know, thirty would be just the beginning instead of the end. While I conquer wedding planning, house hunting, career ladder climbing, business growing, etc- I am really chasing my own unruly expectations. The chase is something I am finally feeling okay with though, after a lot of lost tears, I feel like I’m catching up. But when I finally pass my thirties, heck, I know I’ll be chasing right back after them hoping for a repeat.

So that is how this blog went from untitled to “Chasing my Thirties”. Not so important, but relatively important. Better to give the content some kind of context instead of leaving you there wondering- thirty what? What is she chasing?!

Here’s to long strides, no cramps and remembering- life is a marathon, not a sprint. This may be a slow chase, but it’s one I’ve slowly been getting closer to accomplishing! Also- note to self: I might want to actually get some running shoes if I’m going to pretend I know what running is about. 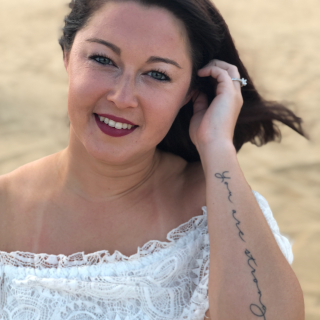